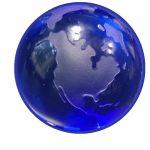 Constitutional law expresses a social understanding of territory, which is dynamic and negotiable. Territory is not an objective entity but becomes a fluid concept, which depends on it´s social construction. The constitutional dimension of geography cannot only focus on a spatial approach, but has to take into account that territory is linked by the human dimension to constitutional law. The group of human beings understood as a society are again a constructed element (constitutionally the people, geographically the population). The presentation concludes that constitutional law is one element of a permanent social process of re-negotiating territorial elements in societies.