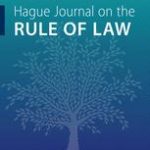 Konrad Lachmayer’s article was published in The Hague Journal on the Rule of Law.