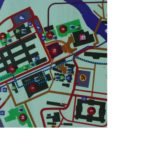 I gave a lecture on “Comparing Constiutional Networks“ at the Irish Society of Comparative Law Annual Conference in Galway, Ireland.